In five-inch heels and a lace pencil skirt, Milan is taking baby steps into the new normal. With supermodels on the catwalk and Paul Mescal in the front row, Fendi had flashbulbs popping at a fashion show for the first time since before lockdown.

Italian fashion is back in business, although not business at usual. At Dolce & Gabbana, guests accessorised their leopard-print cocktail dresses with embroidered black lace face masks. Social distancing meant Fendi could accommodate 130 guests in a venue that normally squeezes in 1,500, and when paparazzi asked Rita Ora to shuffle closer along the front row to Kim Jones, recently announced as the brand’s new designer, security swiftly intervened to ensure 2-metre distancing was resumed.

With Bella Hadid, Kaia Gerber and other Insta-famous US models unable to travel to Europe, Fendi recruited supermodels from other eras, including Penelope Tree, 70, and Yasmin Le Bon, 55. Dress codes were relaxed: Carine Roitfeld, the glamorous ex-editor of French Vogue, attended shows in jeans and T-shirt.

Dolce & Gabbana, longtime bastions of Milanese glitz and glamour, used remnants of fabric from past seasons to reduce the environmental impact of their show. Poplin, georgette and chiffon became a “patchwork of Sicily”, which the designers said was “not throwing away the last thing … you might have old trousers, sweaters, shirts, and you can recreate from other things something new that is yours.”

Milan is the only one of the four catwalk capitals where fashion week is happening in its traditional form. Invitations have been sent out to 23 shows around the city over the next five days. New York held an almost entirely virtual fashion week; in London, most designers met small groups of editors to present their clothes. Next week’s Paris schedule has 20 shows planned but looks set to be a quiet affair, with few international visitors.

Milan’s shows are being celebrated as a landmark for a region that took the brunt of the initial impact of coronavirus in Europe. Little black dresses are the ceremonial robes of this business-orientated city. “Milan is fashion,” said Carlo Capasa, president of the Italian Chamber of Fashion, at a recent press conference. The renaissance is all the more symbolic because it was at the city’s last fashion week in February that the old normal began to crumble. When Giorgio Armani cancelled his show, it made headlines worldwide. Now, with Italy holding the line against a second wave more successfully than most of Europe, fashion week is a chance to show the world that the country is back in business. 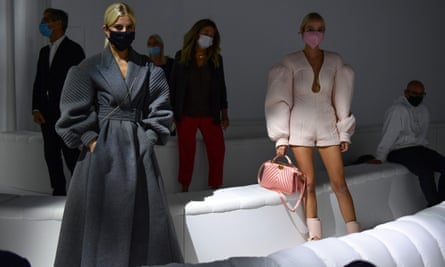 The mood as shows returned was of thanksgiving for the Italian way of life. Silvia Fendi, who took on design duties at the house her family founded after Karl Lagerfeld died last year, sent boxes of pasta – monogrammed, of course – with copies of her grandmother’s lemon pesto recipe with each invitation. On the Fendi catwalk, fabrics were delicate and heels high, but the handbags – which are the brand’s bread and butter – reflected changing priorities, with picnic baskets, soft totes and outdoorsy cross-body water bottle holders. At Dolce & Gabbana, sundresses vamped up with black lace bra straps paid homage to a storybook vision of Italian summer romance.

However, Giorgio Armani does not plan to stage any live shows until January 2021. Donatella Versace had planned a show on Friday evening, but cancelled with a week to go. The most anticipated debut of the season, the new partnership of Miuccia Prada and Raf Simons, will be screened online, while Gucci are sitting out this season. But Max Mara will join Etro, Salvatore Ferragamo and Alberta Ferretti in reviving the catwalk and in another coup for the city Valentino, one of Italy’s most prestigious brands, will decamp from the Paris schedule to Milan for a show on Sunday.

Sources from: The Guardian